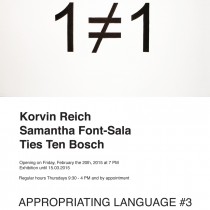 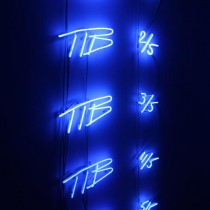 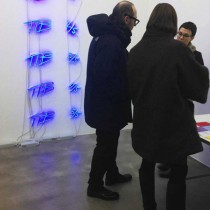 My ‘Initial Numbers’ where on display at Maniere Noir together with the works of Samantha Font-Sala and Korvin Reich. This series consists of five numbered editions of my initials.

What is usually scribbled in the back of an artwork, with hardly any second thought, the artist’s signature and edition number is the work in Ties Ten Bosch’s “Initial numbers” neon series. Ten Bosch takes his initials – TTB – and reproduces his signature as neon sculptures numbered 1/5-5/5. What seems like a clever play on words is a sly commentary on the art market’s (mis)placed value on the artist’s name. The artist’s multiple is taken to it’s logical conclusion: the artist, himself, is editioned. The image and content of the work are the neon signatures, rendered in pleasing color and light. The artists name is thus materialized, commodified and expected to act and circulate as a product, a brand of its own. Ten Bosch’s play on words as a means of questioning the meaning and value attributed to things is evidend in “POEN”, too, which takes the ubiquitous open neon sign and rewrites it to poen, the Dutch slang for money. 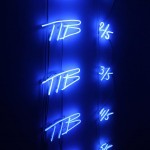 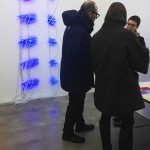